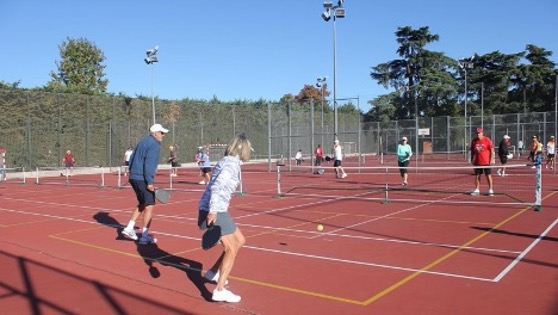 Travelers enjoying the sites on a previous Spain Pickleball Tour

The tour is led by Mike Hess, a California native who has lived in Spain for the past 24 years. Mike has been operating the tours since 2014, and he personally oversees every phase of the tour, including the selection of the hotel, restaurants, transportation and the tour professionals. Mike is a former marketing executive for Adidas and current business professor
at a Madrid university. In 2012 he started the Spanish Pickleball Association and has spent the last decade establishing the sport in Spain. Now he enjoys sharing two of his greatest passions, pickleball and Spain, with travelers looking for a unique “sport-cultural” experience. Mike recently explained the history of his tours and what to expect on the upcoming trip to Spain:

“Since 2014 we’ve had several amazing pickleball tours in Madrid and Barcelona, and for September 2022 I’ve added a new tour to Southern Spain, in the region called Andalusia.” Mike added, “This is definitely not just a ‘pickleball boot camp’. It’s an immersion into Spain led by a local, and a chance to play pickleball with terrific instruction throughout the journey. People from all over the US and Canada have joined the tours and I’ve received tremendously positive feedback. Anyone interested should read the tour testimonials to get a true perspective of what a fun and unique experience we offer.”

Spain is Open for Travel

Mike told us that “Spain has completely reopened for travel in 2022. Hotels, restaurants, museums, sport stadiums are 100% open and there’s no mask required.” About the upcoming tour’s destination (the city of Málaga and surrounding areas), Mike explained, “Southern Spain is the country’s most popular tourist destination, so our travelers are in for an incredible experience. I’ve been arranging the details for the upcoming tour for the past two years.”

Málaga, Spain – home base for the September Pickleball Tours

“Málaga, Spain, is a vibrant and historic coastal city that never sleeps,” Mike told us. This region of Spain is known for its warm weather, rich culture and history, gastronomy, music, art, festive atmosphere, and its friendly people. “From Málaga”, Mike continued, “we’ll take three separate day trips, always returning to sleep at our Marriott 4-star hotel in Málaga. The day trips will be guided tours of the following cities: Granada (UNESCO World Heritage Site), Córdoba (UNESCO World Heritage Site), and Ronda, a spectacular village built on a cliff and dating back to the 6th century BC. And of course, we’ll play pickleball on all of the days we stay in Málaga!”

Two coaches will provide instruction on the tour – Jennifer Lucore and Mike. Jennifer is a National Championship gold medal winner and Pickleball Hall of Famer, and she’s already been on two of Mike’s previous tours: “Jennifer had such a great time and she’s thrilled to come back” Mike explained. “She’s not only a world-class player but an amazing coach as well. Our instruction is designed to help players of all skill levels improve their game while here. And we’ll also have time for competition and open play.” Mike himself is a PPR Certified Pickleball Instructor as well as a USAP Credentialed Referee.

“Definitely!” explained Mike. “Next year’s tour dates will be announced soon on the website (pickleballtourspain.com), along with all of the tour details and contact information.”

Space is limited on the September tour, so anyone interested is encouraged to reserve their spots as soon as possible. Book by July 1, 2022 to take advantage of the Early Bird Discount.